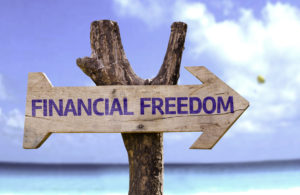 13 years ago, I was in a dark place.  I had been a cop for about 2 years, and I was sitting down looking at a mountain of bills totaling over $80k at the age of 25.  I had just finished my shift on patrol that started with 5 hours of overtime, before I even hit the streets.  I was exhausted, but the mountain of bills reminded me that I had to repeat that overtime, patrol shift cycle again, and again, and again if I was to keep paying the monthly bills.

How did I let this happen I wondered?  The bigger question I asked myself was “how can I fix the financial mess I was in?”.  I was in a vicious cycle that I see all too many of my brothers and sisters fall into, relying on overtime and part time jobs to pay the bills.

The problem with that cycle though is that in order stop it I had to quit feeding my other disease I had, “stuffitis”.  Most of you have likely dealt with a case of “stuffitis” before.  That disease of buying “stuff” you can’t really afford, using debt as the means to get that “stuff”.  Now don’t get me wrong, I had some really nice stuff.  I was driving a $36k luxury car that I had leased after rolling my upside-down equity from my previous last two cars (again at the age of 25).  That meant it wasn’t a $36k car it was well over a $40k car that I was essentially renting.  I was always planning my next vacation to some exotic destination.  By all accounts I was living the American dream.  My parents were so proud of everything I was doing.

On the outside I gave every appearance that I was a successful young “adult” with a successful career.  The reality was I was exhausted and anything but successful.  I was one injury away from complete financial ruin.  You see if I had gotten injured, I couldn’t work my overtime and part time jobs, and that would have meant instant financial disaster.  In a profession where it’s not a matter of if we get injured it’s a matter of when, I knew I had to come up with a plan.

I began using those part time jobs and overtime for what if should be used for.  It’s a tool to help us get ahead financially, not a tool to upgrade our lifestyle.  I began using the debt snowball principles in Dave Ramsey’s book “The Total Money Makeover”, listing all my debts from smallest to largest and paying the minimum on everything but the smallest.  I threw every extra bit of income from overtime at that smallest and slowly but surely, I began to see progress.  I even started selling some of that “stuff” I so dearly loved!!

I committed to making some sacrifices.  The first thing I sacrificed was that luxury car I was leasing, and started driving a 7-year-old basic used car.  I quit planning my next vacation and started dreaming of the day I didn’t have to make these sacrifices anymore.  You see “If you live like no one else (sacrifice now) later on in life you get to LIVE like no one else” ~ Dave Ramsey.

I remember having my debt snowball on my fridge at home and every time I would pay off the smallest debt I would walk up with a huge black sharpie and draw a line through that debt, symbolizing it was gone forever.  With each black line I started to gain something I hadn’t had in a long time—FREEDOM!! It’s now been over 11 years of freedom for me and my family!!  Over 11 years ago since we put a big black line through the last debt we owed!

As first responders we must do a better job of keeping our “stuffitis” in check.  We have to quit using the overtime cycle to pay the monthly bills.  It is one of the single biggest pitfalls I see us fall into.

Reach for that financial freedom that being debt free can give you.  Dream with me for a second.  Close your eyes and imagine a life with no debt payments! Imagine being in a place, financially, that after a 25-year career as a first responder you have the ability to stay if you want to or retire if you want to; however that decision is dictated based on your love of the job and not because we trapped ourselves in the overtime and “stuffitis” cycle!!  Freedom to do whatever you want!!!

Learn how to build financial strength in your first responder family. Get the tools and updates from one of your own. One the most trusted voices on finances in the first responder community. Subscribe to get our latest content by email.

Success! Now check your email to confirm your subscription.

Check the background of investment professionals associated with this site on: